Forlì in the 15th century 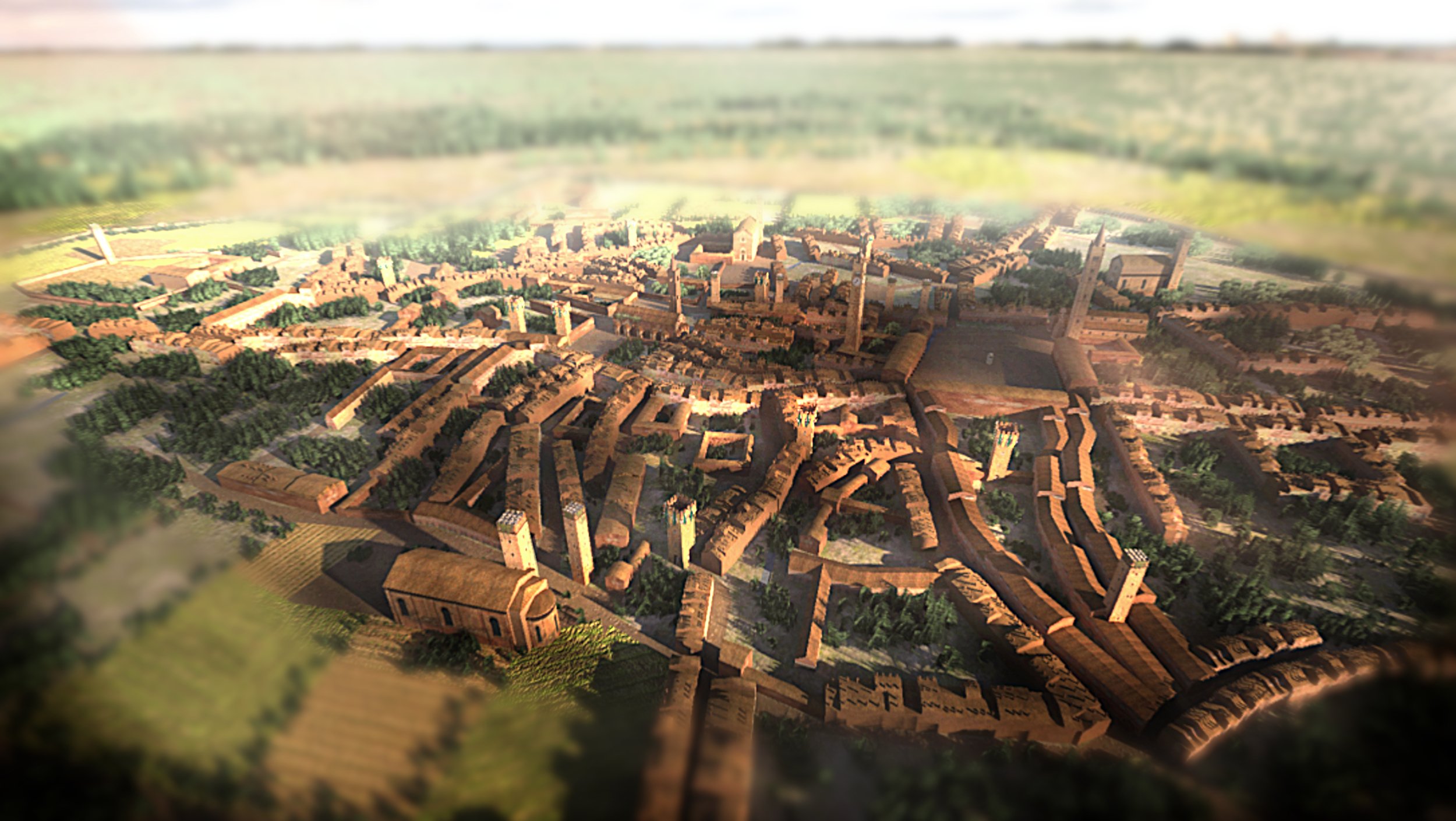 At the end of the 15th century, Forlì had about twelve thousand inhabitants, a number that can be estimated medium-high if we consider that Rome had about fifty thousand. The city was devoid of traces of its Roman origins and had also lost its medieval connotation due to repeated destruction caused by the wars and fires. The reconstruction was started in the 14th century by the cardinal legate Egidio Albornoz – who had conquered the city on behalf of the pope – and continued in the 15th century by Cecco III Ordelaffi and his brother Pino III.

At the end of the 15th century, ancient, modern, rustic and urban buildings blended nicely in the architecture of a city that was trying to adapt to the new Renaissance styles. In the center there were the elegant palaces of the patriciate, built in bricks and embellished with stone ornaments. In the western part, between the Brighieri bridge (later the Morattini bridge) and Porta Schiavonia, there was the humblest area, where farm laborers and pieceworkers lived. Inside the walls, close to the town, there was the green strip of gardens. The Montone and Rabbi rivers flowed between Ravaldino and Schiavonia. Part of their waters had been channeled and directed towards the city where the ditches of the fortress served and provided the energy needed to set the mill blades, millstones and textile machines in motion. Among the urbanization innovations of the Middle Ages we should mention the Ravaldino Canal, a complex engineering work for the hydrographic control of the Rabbi, which for a few centuries had converted the river into the collector and engine of urban factories. Once emerged for most of its city route, it is now possible to see a single stretch of it in the open air in the city, in via Canale di Ravaldino.

Finally, further east, a few kilometers outside the walls, in the direction of Cesena, flowed a third river, the Ronco or Bidente.

Forlì had an oval shape, surrounded by walls, with four doors from which the four main roads passed. Towards Ravenna Porta San Pietro welcomed travellers, while towards the hills Porta Ravaldino stood. The Via Emilia crossed the city from the east, where Porta Cotogni was located in the direction of Cesena, to the west, while Porta Schiavonia indicated the way to Faenza.

The four main intersecting streets formed a cross with the Piazza Grande in the center, in front of the Abbey of San Mercuriale. In the corner opposite the sacred building were the Palazzo del Podestà and the Palazzo del Comune e della Signoria, which was enlarged by Cecco III and Pino III degli Ordelaffi on the original nucleus of a building dating back to around the year 1000. The Piazza Grande was dominated by two high opposing towers to represent political and religious power. On the west side, behind the Palazzo del Comune and the Signoria, there stood the tower of the people and on the east side the bell tower, in Lombard style, built in the 12th century next to the church of San Mercuriale.

Among the numerous churches in the city, San Mercuriale was the most important and was held by the monks of the Vallombrosan congregation. It stood in the ancient Campo dell’Abate, on the area that between the 4th and 5th centuries was occupied by the parish church of Santo Stefano.

On the south-east side of the square there was the Crocetta, in memory of the place where the Forlì Ghibellines had buried the victims of the “bloody pile”, the French soldiers commanded by Giovanni d’Appia, exterminated in 1282 by Forlì people, commanded by Guido da Montefeltro. Near the Crocetta the trumpet stopped every day, calling the citizens from a pedestal to listen to it reading the edicts and proclamations of the lords, as well as the most important news.

In the heart of the medieval city, on the foundations of the ancient parish church of Forlì, there was the Cathedral of Santa Croce with its bell tower. After the year 1000, the parish church was elevated to the status of the cathedral of the diocese of Forlì, after a long power struggle with the abbot of San Mercuriale, in which the bishop’s authority had the upper hand.

The other big churches in the city were: San Girolamo, today San Biagio, which housed frescoes by the most famous Forlì painters; San Francesco Grande, where the lords of the city and famous people were buried; San Domenico, seat of the Dominican order.

When, in 1212, the Campo dell’Abate was donated to the community, it transformed over time into Piazza Grande which gradually grew compared to the square that stood in front of Santa Croce. The Borgo Grande stretched between the two churches, a place of commerce and a destination for citizens’ meetings. Furthermore, as still happens today, on market days in the square, itinerant merchants and peasants came from the surrounding area to sell their products and their wares.

Around the square and in the Borgo Grande there was the area of the shops, “very well stocked with merchandise and cloths of many colors”, as the chronicler of the time Leone Cobelli wrote, while the craftsmen had concentrated their small factories along the canals of the city.

The square was also the place where preachers gathered crowds or where street performers made their shows. In the square people married, celebrated the baptism of a new born or greeted the death of a friend or a deceased relative. The square was a place of business negotiations, political opinions, conspiracy and bargaining. In the square it was held the festival of masks at carnival, with music and songs, tournaments and equestrian jousting took place and, on April 30, the feast of San Mercuriale, the palio was disputed with great celebrations and display banners of the districts.

In the act of taking possession of the city, the new Lord made three laps of the Piazza Grande on horseback, in front of the crowd cheering him loudly. All the religious processions that departed from the various churches to carry around the city the statues of the saints or the relics, made a passage from the square.

However, the square was also the “blood wash … for many men there who ‘shed blood, and many beheaded”, as Cobelli notes. It was the place of the pillory, the gallows, the block and the cleaver and the public executions were carried out there, so that the vision of the sentence inflicted on the condemned man served as a warning for criminals and not.

The government of the city was exercised by a lord, who united all the powers and was assisted by an auditor. Then there were the Council of Forty who exercised administrative power, and a governor and a podestà, who jointly exercised executive and juridical power.

Some lay communities, devoted to prayer and good works, were very active in the city,. They were the so-called Battuti, which were divided into blacks, whites, reds, light blue, green and gray. Among these the most infamous were the Battuti neri, who dealt with reassembling and burying the corpses of the executed and murdered, but also of the poor, the destitute, the sick and the abandoned people.

This was the general picture of the Forlì at the end of the 15th century, when in 1484, after the death of Pope Sixtus IV, the Riario Sforza family arrived permanently.

Go to Top
We use cookies on our website to give you the most relevant experience by remembering your preferences and repeat visits. By clicking “Accept All”, you consent to the use of ALL the cookies. However, you may visit "Cookie Settings" to provide a controlled consent.
Cookie SettingsAccept All
Manage consent

This website uses cookies to improve your experience while you navigate through the website. Out of these, the cookies that are categorized as necessary are stored on your browser as they are essential for the working of basic functionalities of the website. We also use third-party cookies that help us analyze and understand how you use this website. These cookies will be stored in your browser only with your consent. You also have the option to opt-out of these cookies. But opting out of some of these cookies may affect your browsing experience.
SAVE & ACCEPT